Symphony of Death Part 4: Shadowman VS The Undead 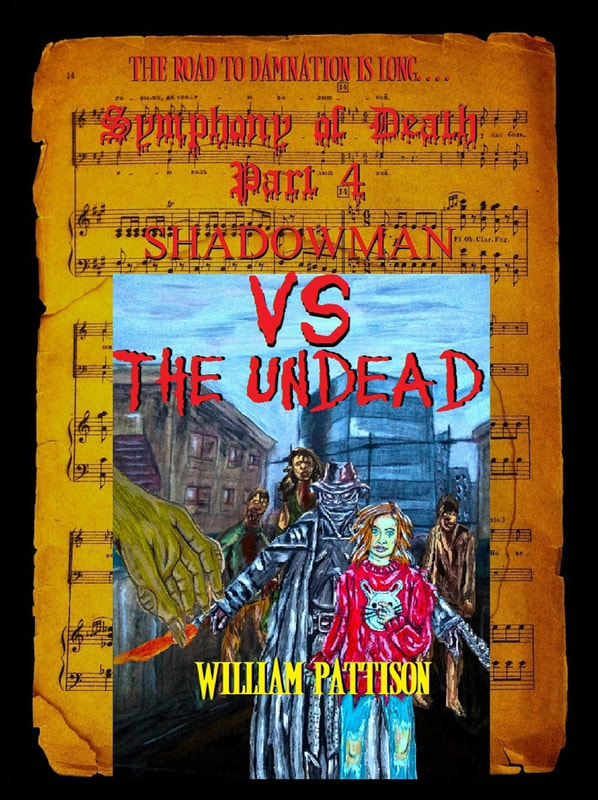 Shadowman VS The Undead
Felicia Donavan was insane and living in a fantasy world until a real-life superhero called The Shadowman saved her and brought her back to the reality of the zombie apocalypse. Seeing her potential, The Shadowman secretly tries to groom Felicia to be his replacement, but she finds out and tells him that she is no hero and has no interest in sharing his delusion. But then a greater evil than even zombies arrive in the city of San Mareno and The Shadowman is captured. Now will Felicia find the hero within her and face the messenger of Death himself or will the survivors of San Mareno be doomed to either death or slavery to a madman who can control an army of the undead?
King of Splatter Punk, William Pattison takes the superhero genre and that of the zombie apocalypse sub-genre of horror and meld them into a tale of reality and its perception versus fantasy as well as the idea of what makes a hero in a setting of insanity and darkness. This story will truly chill and thrill the reader.
The story plays like a graphic novel. The characters and scenery was very descriptive and the story took me there and made it easy to really put myself in the middle of it all with the characters and the world they were fighting to survive in.
Joshua La Rue
The 80’s Slasher Librarian

Now available in Kindle and Print formats. Click on the link to buy the book.