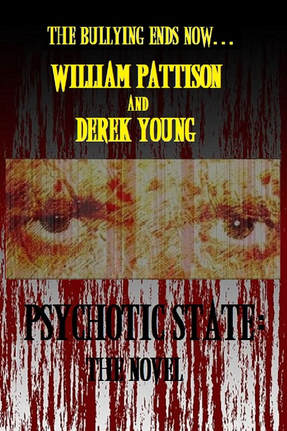 Like Us On Facebook
Psychotic State: The Novel is a book inspired by Derek Young's new grindhouse horror film, Psychotic State. It is written by William Pattison, aka Eric Morse, the author of The Camp Crystal Lake novels.
Description:
﻿David Coleman is a bipolar twenty-eight year old man who is one of those people that the world likes to pick on. He is bullied and abused by everyone around him, including his adopted father. When David gets fired from his job after a run in with a couple bullies he loses his medical and stops taking his medication. This causes him to go into a psychotic state and in a twisted idea of justice he decides that it is time for him to take out all his bullies and abusers. The result is a killing spree and ends with a bloodbath that will be a must read for horror fans.﻿

Read Full Reviews
Back in print  and Kindle on Amazon.com from

Buy the books in print and Kindle

CHECK OUT A SAMPLE FROM THE BOOK.....